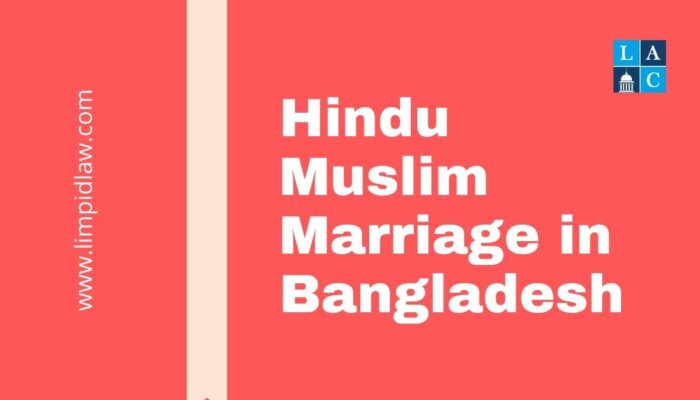 Being a secular country with regard to religious beliefs the marriage system in Bangladesh is far from encumbrances. When it comes from a Muslim perspective it poses different problems and misconceptions about the process as well as the existing law being not well defined. So people suffer from broken marriages to different lawsuits ranging from child custody to inheritance. With regard to Hindu marriage system, one thing can be said is that the system is naive since only in 2012 the Government of Bangladesh has formulated the Hindu marriage Registration Act even where the criterion for registration is kept optional.

Procedure for Hindu Muslim Marriage & other Interreligious Marriage in Bangladesh

We are familiar with questions like can a Hindu boy marry a Muslim girl legally in Bangladesh or Is Hindu Muslim marriage legal in Bangladesh? The answer is yes they can. Let me explain it to you.

In Bangladesh, family laws are personal, meaning that such matters are governed by the religious laws of the individual concerned. If someone is Muslim then Muslim law will regulate his/her marriage related issues.

There will be a different scenario if any of the parties to the marriage is a Muslim. That is, under the Muslim law, a Muslim girl cannot get married to a boy possessing any other religion. Though, a Muslim male can marry any girl, who is a follower of any Kitaab, e.g. a Christian or a Jews only. Hence, a girl cannot get married under the Special Marriage Act 1872 if she declare herself as a Muslim and the boy declares himself as a Christian.

However, the option of marriages among non – believers (atheists) under the Special Marriage Act 1872 still remains open for a Muslim girl. When a marriage is solemnized under the Special Marriage Act 1872, the bride and the bridegroom have to sign a Declaration which states as: “I do not profess the Christian, Jewish, Hindu, Muslim, Parsi, Buddhist, Sikh or Jaina religion” or (as the case may be) “I profess the Hindu, or the Buddhist, or the Sikh or the Jaina religion”.

The Problem in Special Marriage Act of 1872

The above scenario reveals some lacuna or problem in The Special Marriage Act of 1872. According to  the analysis of the above scenario under the Act  it is safe to opine that a Hindu and a Muslim – or a Buddhist and a Muslim, etc. – cannot marry under any law in Bangladesh, and hence are denied their constitutional right to equal treatment. The Special Marriage Act further contradicts Article 16 of the Universal Declaration of Human Rights, which states that “[m]en and women of full age, without any limitation due to race, nationality or religion, have the right to marry and to found a family”.

Moreover, The Special Marriage Act of 1872 does not provide sufficient protection to those married under it. For example, the Act doesn’t contain the clear provisions on maintenance of wife and children, the legitimacy of children, custody of children, guardianship of children, and also the Act reflects certain disadvantages in the rights of inheritance.

Marriage Registration under Special Marriage Act of 1872 in Bangladesh

If the parties of marriage are from different religion then the “Special Marriage Act-III of 1872” is applicable to them. In that case, they have to contact different marriage registrar like Kazi in Muslim Marriage. Here, Marriage Certificate is the principal document like other marriages.

Court Marriage in Bangladesh- Some Clarification:

According to Bangladeshi Civil Law, all marriages in Bangladesh entail proper Marriage Registration and later that leads to acquiring marriage certificate which is the principal document of marriage. It should be noted that the document and relevant procedures are known as “Court Marriage” is the supplementary document which has no significance without a marriage certificate.

Note: Authorization of a marriage in the name of Court Marriage in Bangladesh is not a marriage at all. Hence, the concerned parties/ couple must participate in their religion formalities and legal formalities (i.e.  registration procedure) to solemnize a valid marriage. Notary public authenticated documents have little worth to prove a legal claim regarding the validity of a marriage. It basically ensures originality of a document or certifies a formal declaration.

So people are wondering, how does Islam feel about interfaith marriage? Interfaith marriage in Islam is allowed that means a Muslim man wed a non Muslim women as long as she is follower of any Kitaab or people of the book ( as per Quranic rulings, a chaste woman received scripture before you). It means, as greatly accepted in Muslim community, a Muslim man can marry a Jews or Christian woman but no other non-Muslim. So for example, is it allowed to marry a Hindu in Islam? The answer is “no”. On the other hand a Muslim woman is not allowed to marry a non-Muslim man.

The laws on interfaith marriage in Bangladesh is in well fitted with Islamic law and customs since Bangladesh is country of Muslim majority.  But a Muslim woman is allowed to marry a non-Muslim man in here under Special Marriage Act. In such case, the marriage will be legal but won’t be ethically and socially accepted.

Question: What is Special Marriage Act in Bangladesh?

Answer: Special Marriage Act is a law enacted in Bangladesh Parliament. Generally speaking, the reason behind creating this law was to legalize marriages among the brides and grooms whose religion is different from one another.  If a marriage is not legal then there will be social and legal complication will arise in couple’s life. For example, if a wedding is invalid due to different religion of the couple then the couple’s consummated children will face trouble in inheritance of their parent’s property as successor.

Answer: Well, all the three questions beg the similar answer.  In Bangladeshi social and religious custom, they are not allowed to. Though in some case a Muslim man can marry a non-Muslim woman but not Hindu woman since in Islamic law of Bangladesh and Islamic Shariah law (based on Quran and Hadith) only allowed Muslim man to marry the follower of Kitaab i.e. Christian or Jews. However, a Hindu can marry a Muslim legally under Special Marriage Act. Thus a Hindu marry a non Hindu in Bangladesh.

Question: Can a Bangladeshi man marry a Foreigner?

Answer: Yes a Bangladeshi man and even a woman can marry a Foreigner. So it doesn’t matter about your spouse’s citizenship rather his/her religion in regard to marriage and it’s procedure.  For example, if your would be wife is Muslim or Christan or Jews and she is from USA then you can marry her in Bangladesh in Islamic law.

Do you know what the marriage age is in Bangladesh?  The legal age for marriage is 21 for boys and 18 for girls. So in Bangladesh any boy of 21 and girl of 18 can marry legally irrespective of their religion.

Was the above information was helpful? You can always SHARE, and make people aware about law and rights.

The above blog is for knowledge or information sharing purpose only. In terms of getting any legal help we always strongly advise to contact a professional lawyer. For professional legal help you can call or contact here.